by Kathy Caprino, cross-posted with permission from Forbes

Part of the [Forbes] series “Women, Leadership and Vision” In my 18-year corporate career culminating in my role as a Vice President, I personally experienced every managerial and leadership behavior you can think of, from the most evolved and progressive, to the most archaic, backward, and damaging.  I’ve also personally hired, collaborated with, and led a good number of both men and women to support my various employers’ work and visions.

What I’ve witnessed firsthand, as a corporate executive, therapist, and now as a career and executive coach and leadership trainer, is that every one of us on this planet has biases – both hidden and overt – that keep us, and others, from thriving  at the highest levels of success, reward and impact. And each of us on the planet has what I call “power gaps” – areas where we feel less then, unworthy, or challenged, that we try to hide.

Only when we have the courage to “brave up” and address our own biases and power gaps, can we hope to move forward to build a world of equality and mutuality, giving ourselves and others unlimited access to power, contribution, success, fulfillment and impact.

Towards that end, I was thrilled to catch up with Kristen Pressner, who has a great deal to share on this matter. Kristen is Global Head of Human Resources for Roche Diagnostics in Basel, Switzerland and supports nearly 35,000 employees across more than 150 countries worldwide. With nearly 90,000 employees globally, Roche is the world’s largest biotech company and the world leader in in-vitro diagnostics. I deeply respect her work, and her courage to share her own biases against women leaders in a very public way.

Kathy Caprino:  So Kristen, you’ve recently ‘come out’ shall we say, and very publicly, via your TEDx talk, and shared that you have a bias against women leaders.  How did you discover this?

Kristen Pressner: It’s funny Kathy, because most of us have heard about unconscious bias, maybe even had training at work. But I think deep down we all kind of think it’s ‘everybody else’ who is the problem.

I had this pivotal moment when I was approached by two team members asking me to have a look at their compensation. It was a few days later that I connected that I’d had very different reactions to the same request, while I was, ironically, doing some research on unconscious bias. Suddenly, seeing the word “provider” being associated with men, it hit me. Wow…I have a bias here.

Particularly shocking to me was: I’d always thought that you could only have a bias against someone who was different than you. So it really struck me to discover to realize we can have a bias against exactly what we are . I am a woman leader and provider, yet simultaneously, I have a bias against women leaders and don’t see them as providers. It was even more humbling when you factor in that I work in human resources so… it’s my job to be unbiased.

Caprino:  Did it worry you that it might be, shall we say, ‘career limiting’ as an HR executive, to share that in such a public format?

Pressner: Yes, it felt very vulnerable; there are a lot of trolls out there! But, it’s easy to go to training and then accuse others of unconscious bias. It’s only when we recognize it in ourselves that we can we change.

So it was one of the most humbling moments of my life to realize that I could have a bias that was counter to everything that I stand for. I realized that if I honestly shared my experience, it had the potential to move each of us from defensive mode to discovery mode. If I could disarm the situation with my own admission, provide pragmatic advice regarding what to do about it, and spark people’s curiosity, then it would totally be worth it.

In addition, how courageous was it really? Sure there are a lot of people still in the “I’m not biased, I have a (fill in the blank with a description of a person who isn’t exactly like me) friend” camp, but the fact of the matter is: being biased is part of being human.

Caprino: As an HR Leader, what do you do to combat your own bias?

Pressner: So the first thing I did, and I recommend this to others, is to recognize the different types of bias and come to grips with the fact you might have bias/biases that surprise you.

Bias takes many different forms besides gender. My TEDx talk only focused on that because I am a woman myself. There are other obvious ones: age, race… but there are also less obvious ones: new mother, weight, introversion/extroversion, and more. An eye-opening (and often humbling) thing you might want to try is taking one of these online Implict Association Tests.

The next thing is, you need a trick to move from allowing your unconscious brain to handle things, by returning it to consciousness.  To do this, I suggest: flip it to test it. Just mentally flip whoever you’re dealing with, for someone else, to test yourself.

For instance, if you’re interacting with a woman in the workplace and she’s coming off as arrogant, flip it and ask yourself how you’d feel about that situation if it was happening with a man.  There’s a Twitter TWTR -3.99%account that I love, because it just flips things we commonly say, and besides opening our eyes to how ridiculous they are when you flip them, they’re funny: @manwhohasitall.

His tweet of August 11th, for instance, is this:

Or look at the surprising number of newspapers that put a photo of Bill Clinton on the cover when Hillary Clinton accepted the Democratic party nomination. Flip it to test it: can you imagine a male nominee’s spouse being the one they choose for the front page photo? 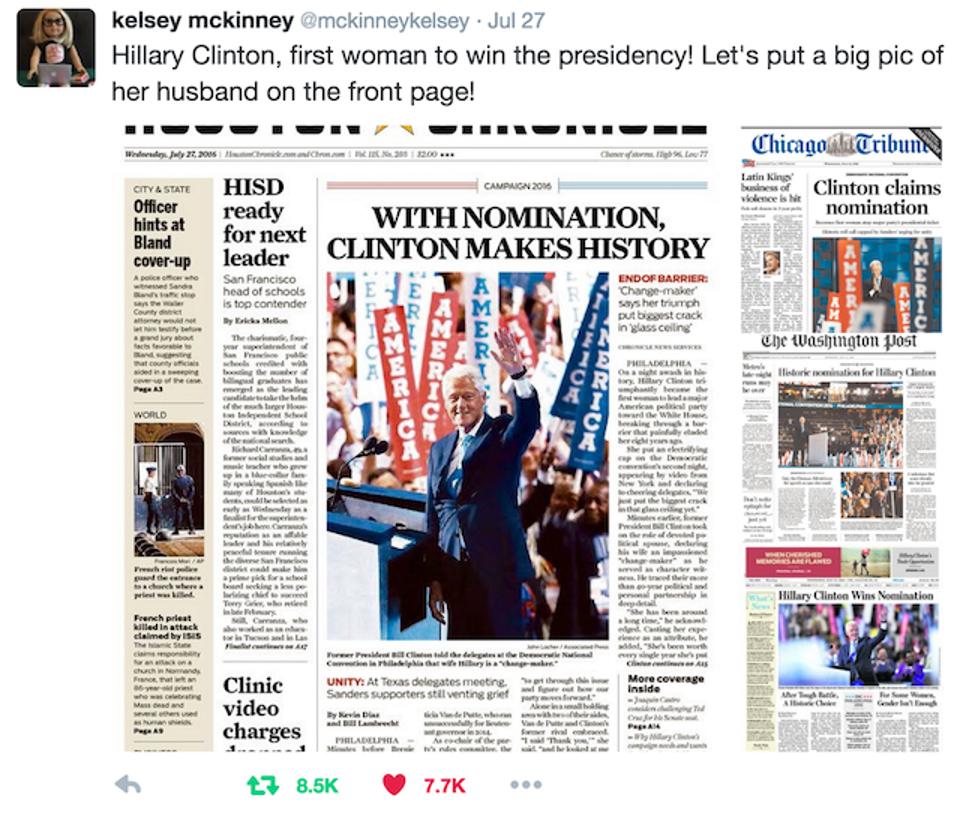 And here’s another “flip it” example to ponder, regarding Amal Alamuddin marrying George Clooney.

Caprino: What do you do for your organization to make sure that your thousands of employees are aware of bias, and mangers and leaders are opening their eyes to how their own biases are affecting their behavior?

Pressner: This is where it can get tricky, because even though Unconscious Bias training is the big thing, some research shows it may be ineffective or can actually backfire.

Yet I still think it’s important to have brought the topic to the table ‘while the stakes are low,’ to create a common understanding and so that you have something to you can refer back to later.

This was a big part of why I did the TEDx talk, and why it is purposefully short (an ‘easy pill to swallow’) and disarming: I wanted to help a broader population of people gain an understanding of the fundamentals of unconscious bias and then catch their curiosity—by putting them into discovery mode instead of defensive mode. From there, you simply have a better chance of catching yourself. Exactly the way I caught myself.

After awareness, we are working to build a culture of sponsorship.

People often don’t know the difference between mentorship and sponsorship so let me quickly explain:

•  Sponsorship happens when you’re not in the room (someone more senior than you who is advocating on your behalf to others for upward steps in your career).

Both are important in terms of how we grow our careers, and this often happens naturally at work. Yet the research shows women and people of color are often under-sponsored. We are systematically ensuring sponsorship opportunities for those who are typically under-sponsored, via specific programs.

This in turn helps build a culture of sponsorship in our organization and helps create a growing number of people who see themselves as diversity champions. One colleague confessed to me, “I realized I had a bias against (a certain nationality). But by actively getting to know someone from (there) and sponsoring him, I felt that bias start to subside.” The research bears this out.

Caprino:  What are the top four strategies for organizations to employ, to address unconscious bias?

Pressner: Here are my top tips:

To ensure a common basis and understanding from which to then have a discussion, share observations, explore openly why it matters, and explain the business value.

• Ensure a diverse candidate slate, project team or panel discussion, even if it is a little more work.

• Think broadly about what the “best” candidate is and what experience they really need (is there something magical about 15 years of experience?)

• Use inclusive language.  It may sound minor, but if the gender isn’t known, say he or she, not ‘he’. A colleague from the Netherlands pointed out to me that one of my social media pages was translated in Dutch to: Kristen Pressner-business man.

• Surround yourself with images that counteract stereotypes to rewire your brain.

• Run meetings that are fair to all (read this Harvard Business Reviewarticle for more info.)

Give everyone a role.

Involve as many people as possible, at all levels of the organization, because from there you can have a diversity of perspective involved and you can start a groundswell.

Return yourself to consciousness.

Get in the daily habit of flipping it to test it.

To address your own biases and power gaps, work with me, and understand your authentic Dominant Action Style.