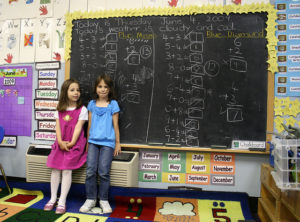 Reports that were  recently  released show some dismal statistics. It appears that girls today are no more interested in the subjects of science, technology, engineering and math (STEM) than they were 10 - 20 years ago. According to a study from the Florida Gulf Coast University and the University of Colorado at Boulder getting girls to pursue a career within STEM is proving to be as much a challenge as it ever was.

Though two out of three school age children (boys and girl) say they like science, those numbers drop when entering middle school. And while in middle school many girls will pursue advanced science courses, their interest drops once they enter high school. These results align perfectly with the number of women pursuing degrees in science, which has dropped dramatically since the mid 80s.

Men still outnumber women 73% to 27% in science and engineering. And with the number of girls losing interest in STEM one they reach high school it’s no surprise.

The question parents and educators are asking themselves is how do we zero in on the interest shown by middle school girls and keep it growing into high school and beyond?

Well the Lower East Side Girls Club in New York came up with one idea. Give the girls some tools and tell them to make a robot.

A group of girls from the Lower East Side Girls club built Girlzilla, built Girlzilla, a robot built on the base of a wheelchair and made from steel piping, recycled electronics and fabric remnants. This is part of several programs being built by the Lower East Side Girls Club to encourage girls to take advantage of the new jobs and scholarships available in the fields of science and technology.

Many organizations are also trying to help encourage girls by offering grants that will help expand science and engineering job-training programs for girls and women. The Lower East Side Girls Club received such a grant from the United States Department of Justice. It may not be much, but just giving these girls an opportunity to build a robot is one small step in the right direction.

We would love to know your thoughts on this study and what they are doing in New York. Are there programs in your community helping to inspire girls to stay involved in STEM? And what are some of the ways you think we should be dealing with the lack of girls in STEM?